Smart Gadgets: How much is enough?

When I was a two-year old, all I worried was about a cloth-stuffed doll with a red frock handmade by my grandmother and my blue blanket more than anything else. At three, for my first pencil…. I do not remember any of this but that is what my mother tells me!

My mother still laments how I let, the first black and white camera that my parents had, slip from my hand into the Arabian Sea. My parents were visiting Goa with a two-and-a-half-year old me. My mother tired of carrying me around, put me down near a rock at the ferry point and entrusted me with the camera for a minute or so. By the time she decided to hold the camera again, it was already drowning in the sea!!

Our home did not have a television till I was in sixth grade in school….there was one big ‘Bush’ radio though and a ‘Philips’ LP player and we were not allowed to play with the knobs and needle of the radio and player!!

Why am I remembering all this now? Because, aaj kal ke bacchhe are born into a household which has at least one big screen television, music system with radio, CD and cassette player(till few years back), another music system in an air-conditioned car and at least one mobile ( smart phone, these days) at home!!

I am not jealous…not at all. In fact I feel our childhood which was free of all these distractions was much much better and healthier than it is for kids of today. When I was a kid the teachers at school made me hold crayons and toys  for enhancing motor skills….

Today, many parents let their kids not only handle and use smart phones but also buy them costly I-pads and Tabs. The kids no more indulge in careless running around, getting hands dirty in soil, wait for their turn at the park swings or innovate some outlandish idea with pillows and sofa cushions at home!! 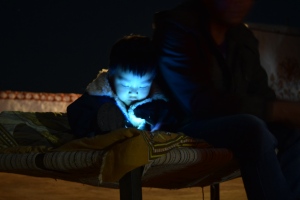 The kids today are more adept at handling a smart phone from a tender age of almost two than they are interested in holding a pencil.

Our neighbours’ son plays games and slides the screen of smart phone so easily without batting an eyelid….and I on the other hand could not even understand what the game was all about in first few minutes!!

When my daughter was born twelve years ago, we did not have a smart phone. This year my husband gifted me an advanced version of smart phone. I was of course excited but more than me, it was my daughter who was happy and itching to use the phone! We follow a rule at our home, that the person for whom some thing has been brought would be the first to use it and then the rest of the family would handle the item. Being busy with the mundane chores of the house while my husband switched the SIM-card from the old mobile set to the new smart phone, I allowed our daughter to ‘see’ the new phone first.

A good half hour later, when I was finished with loading the washing machine and boiling the milk, I handled the new phone for the first time. To my surprise, it already had my daughter’s image set as wall paper and ‘Talking Angela’ purring for attention!

It took me two days to understand all about the new phone and when I was not looking, my ‘tween’ daughter was creating, deleting, editing, uploading, downloading, shooting, recording, saving, filing away on it…. God knows what all!!

She finds time to watch animated movies on the You-Tube(Oh! Thank god for that!! And she has still not insisted on opening a Facebook account though her friends have it), plays ‘Mah-Jong Titans’, ‘Purble Place’ and many other games on the laptop, has a favourite site ‘Kizi.com’ for some internet games…. as far as my knowledge goes.

She is one of the toppers of her class but still I find it pretty frustrating to see her glued to these gadgets at home for, what I consider, a considerable  time. Our arguments  pretty much always revolve around this topic. She has quite a knack of sketching if she decides to draw one of the days, but the problem is that such days are far and few. She has a Synthesiser  which she has almost stopped playing since the day she discovered smart phone and laptop.

Personally, I am not comfortable allowing kids to spend time in front of televisions, laptops, gaming consoles, smartphones and all other ‘digital’ educational platforms.

I want my child to go out in sun, get wet in rain, smell the fresh wetness of rain drenched earth, see the flowers, birds, bees, play with friends, run wild, cycle, bruise herself, defend herself from a bully, read a paperback cover to cover, discover a pebble, a shell, a snail, watch the waves ebb, enjoy the setting sun, count the stars, draw patterns in sky, imagine different shapes of clouds, name the constellation overhead, feel the chill of the mountains, the gurgle of the river, the roar of the ocean and feel the wind in her hair…..

A limited exposure is of course necessary, but let us not thrust in their hands, the controls of gaming consoles, smart phones, laptops and other such mediums, just for our convenience, just for making them stay out of our hair….

Let us count with them on fingers, with matchstick, with butterflies….let us sing along with them all the rhymes and songs with animated facial expressions and see them grin ear to ear….let us make them fly kites of all shapes and sizes….. let us make them pick up stones, paper, grains to feel the weight….let us make them try holding on to the sand….let us show them how a seed germinates in the garden and how a flower blooms….. Let us give them the confidence to speak  and ask their doubts and not just stare at the screens without totally understanding… Let us be with them to teach and to play!

I believe "Life is short and the world is wide"and travel is best possible solution to make the best of this life. I am Shoma Abhyankar. Welcome to ASTONISHING INDIA.
View all posts by Shoma Abhyankar →
This entry was posted in Uncategorized and tagged #Aajkalkebachhe contest, connected world, media, parenting, smart gadgets. Bookmark the permalink.

This site uses Akismet to reduce spam. Learn how your comment data is processed.